Intelligentization Will become The Trend of Food Foreign Body Detectors

With the global improvement of food safety and export food hygiene and quality requirements, and in order to prevent the good quality image and company reputation that have been established for many years, the prevention of metal foreign matter in food products has become a necessity in quality management. topic. In order to avoid the occurrence of similar incidents, food processing enterprises are also striving to improve the level of food foreign body detection while strengthening health management, which promotes the continuous development of food foreign body detection technology to a certain extent. According to the difference of detection technology and the different objects to be tested, the detection methods of food foreign object detection are mainly divided into three categories: one is the technique of detecting foreign matter mixed in bulk products by the difference in size or weight of foreign matter and food, due to the limitations of the technology itself. The development prospects are quite limited; the second is the technique of checking the mixed foreign matter in the loose products according to the shape or color analysis, which is mainly the optical detection technology; the third is the technique of detecting the foreign matter in the food by the interaction of the electromagnetic spectrum of the foreign matter and the partially transmissive product. Such technologies, such as magnetic metal detection and X-ray inspection, have been widely used.

The earliest giant magnet placed above the food conveyor belt is the prototype of the metal detector. When the metal foreign matter in the product is absorbed by the strong attraction of the magnet as the product flows on the conveyor belt, its limitation is only It can detect metals with magnetic properties. Therefore, the metal detector with better performance is well utilized as the detection requirements are improved. Its main object of detection is metal, and the metal is roughly divided into three types, namely ferromagnetic metal, non-ferrous metal and stainless steel. The ease of detection is determined by the magnetic permeability and conductivity of the metal itself. If the iron metal itself is magnetic and has good electrical conductivity, it is easy to be detected; if it is non-ferrous metal such as copper, lead or aluminum, although it does not have magnetic properties, it has good electrical conductivity and is relatively easy to be detected; There are many kinds of stainless steel products, some of which are magnetic and some of which are not magnetic, and the electrical conductivity is not the same. The 304 and 316 stainless steel products are most commonly used in the food industry, so their lowest sensitivity is often used as the primary detection range for metal detectors.

In order to better implement high standards of hygiene and quality control, X-ray foreign body detectors, which were widely used in medical and safety inspections, have also begun to perform their outstanding detection capabilities in food testing.

Using the strong penetrating power of X-rays and the principle of image formation, it can detect not only fine metal particles or fine lines that metal detectors cannot detect, but also non-metallic foreign objects that metal detectors are unrecognizable ( Such as glass, stone, hard bone, hard plastic, rubber, etc., which largely solves the trouble of mixing other non-metallic foreign objects in the user's products, so that the user's product quality has been improved. In addition, the current X-ray foreign body detector also uses the shielding function to detect various foreign objects in the metal canned product and the use of the product inspection function to detect the damage or lack of the product. These features are all metal detectors. Unpredictable. In addition, in the inspection mode of X-ray foreign object detector, the world's first genetic algorithm (Genetic Algorithm) technology is applied to X-ray image processing, which is more effective and comprehensive for foreign matter detection, making food more secure and safer. 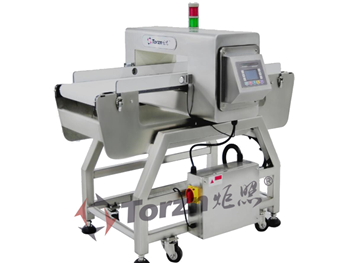